For instance, if a player was dealt a two of hearts, a two of spades, a two of clubs, a two of diamonds and an ace, they would then be able to make five of a kind with either the ace card or the multiple two cards. This game does not differentiate the different values of cards, so the payout for five ace cards would be the exact same as the payout for five two cards. This is the case because the player is actually playing against themselves and not trying to make a better hand than another player.

The difference between Loose Deuces Multihand and other wild variants, such as the joker, is that there are a total of four wild cards in the deck instead of just one. This also comes with the side effect that the payout structure for this game is changed accordingly. While some other games of this type will start paying out to the player at jacks or better, the payout for Loose Deuces Multihand starts paying out at three of a kind. They are also typically lower until you get towards the top of the payout table. This is because there a total of four wilds in the deck and making winning combinations becomes easier for the player.

The layout for this game is a simple black background with the name of the game at the top. In the top right corner is a blonde woman surrounded by a neon heart, spade, diamond and club. Below here, multihand is lit up in bright blue and orange neon with the number of hands that the player is playing each round. Below this is the bet. This can be adjusted by the player by pushing the green arrows to the left and to the right. Towards the bottom is the player’s hand. Above the player’s hand are additional hands which will be played after the player has decided which cards he wants to hold and has hit the draw button.

At the bottom of the slot, the player is able to make multiple betting options, utilise the deal button to get the game started, insert coins, and view their payout, bet, total bet and remaining credits. 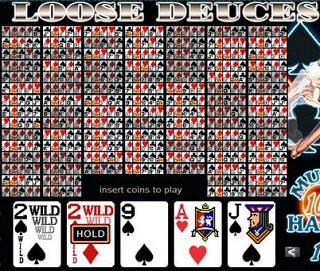 The payout on this slot starts with three of a kind. From least valuable to most valuable, paying hands also include a straight, a flush, a full house, four of a kind, a straight flush, five of a kind, wild royal flush with twos, four deuces and a royal flush.

The highest paying hand in this slot is a royal flush. It will pay the player four thousand times their initial bet.